These artifacts are then processed through photographs. These photographs are then each given a description and then categorized into many smaller subgroups from the decade during which it was discovered, to the type of object it is to the type of decorations it has.

In terms of the presentation, the sight allows the user to navigate through different sub sections and categories of objects exploring the various objects. The objects themselves often do not have names and instead are represented by photos alone. This sort of presentation may make sense since there are millions of artifacts which have been cataloged thus that much text could be overwhelming when exploring the artifacts.

Overall the site itself is massive in its scale. There are almost 1.9 million artifacts cataloged and meaning about 1.9 objects which have been meticulously photographed and then given a description. In terms of navigation, one can either choose to explore the artifacts based on the various categories. Decades are represented by squares with darker squares showing that more objects had been collected during that decade. This in my opinion is a clever way of presenting an age old form of categorization. Other categorizations such as collections are generally represented by photos of objects within those collections. 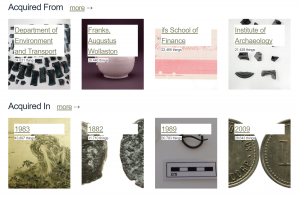 The objects themselves though are many don’t have too much information associated with them besides the basic facts. This is probably due to the immense number of artifacts present in the collection. Overall the sight itself offers a good overview of the many artifacts available to be seen at the British museum though the information is not densely packed meaning anyone trying to discover historical roots of many artifacts will be left disappointed.