I chose to reverse engineer a digital project called Mapping Occupation project By Gregory Downs and Scott Nesbit, which “captures the regions where the United States Army could effectively act as an occupying force in the Reconstruction”. 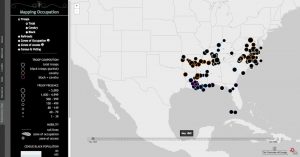 When first visiting the site, I was presented with a large map of a portion of the U.S. States with information on troop presence and a side bar of text on “Force, Freedom and the Army in Reconstruction”. We are given two different methods to engage with this information. The map itself has a legend of increments from 1 to above 5,000 in terms of troop presence, which are represented by circles, which vary in corresponding sizes. The text located on the side of the map provides a narrative view to the static map, complementing the map and vice-versa. Having taken in the landing page, I set out to understand the rest of the data flow from this project.

The page I had landed on actually constituted one of the 6 main information tabs. Labeled “Narrative”, it combined a simplistic version of another main section “Exploratory Map”. The other sections contained information about the website itself, methodology, data gathering and credits. The exploratory map shows us all 50 states and their borders with information that we can toggle on and off. It provides much more in-depth information than the map that accompanies the narrative as I was able to select a month and year at which to view my chosen data. Unlike the narrative section, which is setup to tell a specific and pre-determined story with a visual aid for added information, the exploratory maps allowed me to create a visual story that I was interested in by using troop, cultural and historical data from 1865 till 1880.

In the “Methods” section, we are informed on how the data was collected. There were two main inquiries to gather their data. “The first is in figuring out where soldiers were stationed, how many were stationed there, and how long they remained. The second is in proposing rough estimates for the effective reach and accessibility of the U.S. military, what we call Zones of Occupation and Zones of Access.”

The first was collected thanks to monthly reports done by the military. They encountered many issues however when attempting to extract this data from the reports due to disparities in reports and lack of detail in certain instances. More can be read about the errors they may have in their data and the assumptions they made in extracting the data here.

For the Zones of Occupation, they assumed that U.S. infantry would march up to eighteen miles per day, and that cavalry would ride for thirty with a limit of 6 hours on travel time. For a train, they assumed that it would travel at 20miles per hour. Using these assumptions, they were able to keep track of the troops’ movements at all points in time.

For Zones of Access, or the “places from which freedmen might reasonably travel to a military outpost”, were more constrained. They assumed that the zones of access would be circles with a radius of 18 miles, a six hour walk into town.

Overall, I think this project was very well done in its execution. It is easy to understand and manipulate the flow of information available. However, I thought it was unfortunate that there was no specific information regarding the movements of troops. The text provides a backstory that helps us understand, however it is not a perfect compliment. I found myself unable to dive into more detail with respect to specific troop movement, which was unfortunate. In addition, the map and its marked legends do not scale well with zoom as they are fixed at a constant size despite the varying zoom in and out of the map.