Welcome to “Whose house is it anyway?” where the scale’s made up and the proportions don’t matter. During the course of my battle to build my house, I discovered a few things. TIPS:  Occasionally, when you have intersecting shapes (like the second story and the first story roof)faces will not appear between the lines and you have to get somewhat creative t 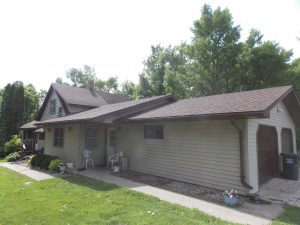 o get shapes where you want them to be. Secondly, Sketchup by default uses a feature called “Autofold” to handle the way attached lines/vertices move when the user uses the move tool to move a single 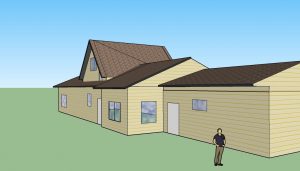 line or point. Using alt + move in combination with Autofold can sometimes help navigate the “sticker” faces, when the move tool alone doesn’t want to do the trick. In addition to the tutorials already provided by Austin, I was able to find the answers to a few of my questions just by googling and being re-directed to previously asked questions on help forums.

So, on to the process itself.

I suppose I could have looked for more references and tried to be more exact in some of my proportions, but I really did want this to be a “by memory” project. So while you’ll notice my sketchup model is not very accurate to my actual house, it does at least provide a similar resemblance. I hope.

I began with the basic shape of my house by rouging out an outline made of rectangles that represented the various rooms and hallways. This was easiest for me so I wouldn’t accidentally forget a segment. (I nearly forget to pull out part of a bedroom that is a major part of the house’s face.)

On my house the room was the most difficult part, as the second story doesn’t rise up neatly from the first floor, but instead juts at an odd size, pulled back from all edges and in a square rather than a rectangle. I spent a lot of time crafting the first floor’s roof and then creating the second floor and raising it somewhat like a tower, then adding the sloping roof.

Once I had the roof itself it was easy enough to give the shingle layer more depth, although there is one roof face where this didn’t quite work out. Two slopes slide into each other, creating a complex merging figure and at this stage I just couldn’t figure out a way to separate the two shapes into two distinct, 3D-able forms without adding a hundred different lines to build the two up.

One thing that was somewhat frustrating was my incapability to actually locate the smart interfaces when drawing lines. Occasionally when pulling across what I thought would be a line with an easy reference point at the end, I wouldn’t be able to find the point to snap to, and ended up just circling the area with my mouse until I either found it or made a best guess until I could come back.

Despite the somewhat bland appearance of my finished house, I’m very happy with the outcome. SketchUp is not an easy program for me to begin learning, but I feel like my house is a marked improvement from my doghouse. (Even if the scale is made up and the proportions don’t matter.)

2 Replies to “Whose house is it anyway?”