One premise to get out of the way immediately: my house is much more complicated than a dog house. It’s an old blue victorian-style house so my room growing up was in a turret. The victorian style also means my house has a lot of molding, shutters, windows that jut out from the roof, overhangs, etc. 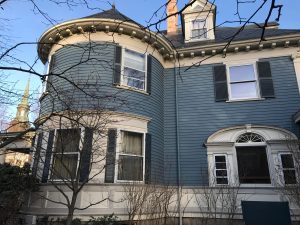 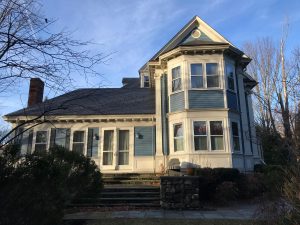 For the most part, I ignored the small details except for the overhangs in the front of the house so I could focus on the overall shape of my house. The proportioning was the hardest part initially because my house underwent a couple renovations so the kitchen and the family room jut out the back.

The most exploration I did in SketchUp was with the different shape tools. The major shapes in my house are rectangles and triangles, as you’d expect, but my kitchen is an octagon cut in half at the midpoint of a side and the top of the turrets are cones. Another complication of the turrets: the one on the left of my house looks more like a cylinder shoved into the corner of a rectangle, and the one on the right a half-circle glued to the side of a rectangle 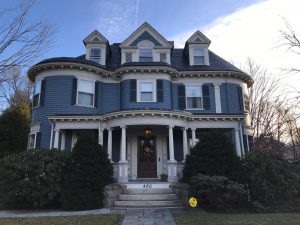 To make an octagon I used the pentagon tool to embed a pentagon into the back of my house and then drew a line across the point to make an extra face. I had to zoom into my model so that my line tool wouldn’t automatically snap to the midpoint because drawing midpoint to midpoint left a face too small for the kitchen windows. 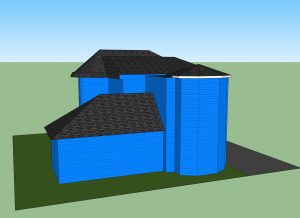 The cones I had to google to figure out how to make. In summary:

2.) Use Push/Pull to pull the circle into a cylinder

3.) Use the Move tool to move the outer edge of the cylinder into the midpoint. You may have to fiddle with which point along the edge will fold the cylinder neatly into a cone

I ran into some problems because Sketchup doesn’t register two planes of the same size and shape on top of each other. This meant I had to make the cone slightly larger than my cylinder, delete the original cylinder so I could pull the roof up, then redraw and pull the turret down from under the roof. Looking back, I think I could have drawn the cone to the side then moved it onto the turret but since I was going by proportions and not exact measurements I tried to build directly onto the model if I could. 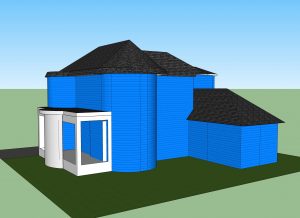 You can see from the picture that my porch is still somewhat solid. I couldn’t figure out how to draw on curved surfaces to then push/pull or cut out planes on my model.  This also prevented me from drawing the white molding that runs along the bottom quarter of my house. The line tool only works with flat surfaces and using the half-circle tool doesn’t place the line flush against the curved surface. Also, the push/pull tool sometimes wouldn’t let me pull in both directions, only one. I’m not entirely sure why that is the case, but I was usually able to work around it. Though those work-arounds, I was able to draw some of the overhang off the edge of the roof. I had to zoom under my roof to draw a new plane and pull it out from the building but It was well worth the effort. 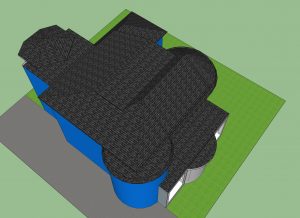 4 Replies to “Building My House”