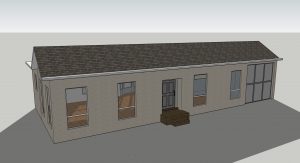 learned from a friend that this Carleton course, “Hacking the Humanities,” was supposedly lots of fun, featuring a plethora of digital technologies. Since my friend told me about it, I have been looking forward to taking the course. As such, when the first day of class was postponed, I was deeply disappointed and redirected my sorrow to the internet. I googled the syllabus to find the first homework assignment to get a taste for class, hoping that my efforts for 2017 matched the previous direction.

Upon discovering that the first assignment rotated around mostly free software, I downloaded the software and went about teaching myself how to use it. This is where things in retrospect are kind of funny because I didn’t get the in-class introduction to the program. Completing even simple actions was difficult. For example, on the first house, I tried to design, I attempted to draw a box using the Line draw tool in 3D space resulting in a mutated box. It was only after 30 minutes and some YouTube videos that I discovered the whole process could be made easy via the use of the rectangle tool and then extruding the image into 3D space. 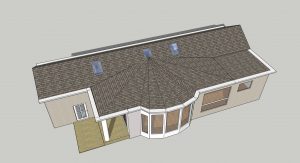 With the help of YouTube faculty guidance, drawing became easier, and my house started to take form. It is at this point that I would like to mention both the amazing benefits and shortfalls of YouTube videos: while the video taught one how to draw complicated shapes and gave tips on good design, it skipped the more simple things. For example, two and a half hours into the process with the help of the tutorial videos my house looked amazing, featuring nice indented windows with multiple layering and a varied roofline. It was at this point that what the video did not teach me came to haunt my construction: the lack of the “pan” ability. Please, note: I knew how to get around via the pan icon on the screen and then rotate the image on the mouse. However, I did not know of the “shift click” pan hot key; thus, as panning took a large amount of effort, I tried to use it as little as necessary. This meant that I did not often view the house from a variety of angles and as anyone who has modeled before surely knows, that’s not a good thing. The end effect of this mistake was that my house was slightly crooked, necessitating me to start anew. Perhaps, the friendly neighborhood Cubist would have been fine, but who wants to live in a Picasso’esque dwelling? 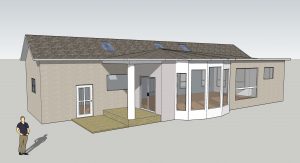 After a few more hours of work with backtracking and remodeling, I arrived at something close to final product. I then painted the house, using a combination of provided and custom texture files and rescaled the house. At this point, there were only two problems left: one of the house faces would not let me indent the window and another insisted that it was divided into two faces even though there was no dividing line.

The problem with the window was peculiar: I originally thought the problem was in how I drew in the exterior frame. However, after redrawing multiple times and attempting to move/redefine the object, nothing changed. Finally, I gave up on the window and simply removed the entire face of the house to redraw it, which ended up functioning. I assume what had happened was multiple layers overlapping in that section, which I noticed while removing it, caused the software to get confused.

The invisible dividing line problem was fixed only by tenacious trial and error – i.e., luck and the fortune of the gods – as I tried everything from the erasure tool to removing the portion of the house – all to no avail. The program continued insisted on cutting the face diagonally down from the top right to bottom left.  In the end, I discovered what was causing the problem while I was attempting to export the file. I stumbled open a button entitled “unhide.” I wish all problems in life had the unhide button. The irony of life is that the unhide button is often hidden. Upon clicking the option and selecting “all,” a line running nearly the full length of my construction was revealed, having been hidden before.

The first is ascetic. Tip One: 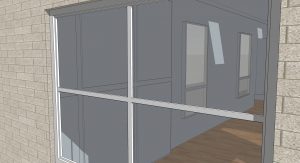 When modeling, I found that the more small indentations one can make, the better the end appearance. For example, when adding windows, don’t just draw one in, extrude it inwards to represent the insert in the building and then add a small frame on the sides that are also indented creating a nice layered image. 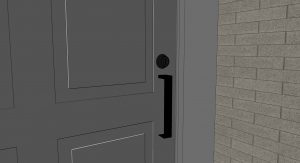 See the window above. I also went into similar detail on the doors.