This week we are going to explore some dos and don’ts of data visualization as you prepare for your final projects.  Edward Tufte is widely considered one of the world’s leading data visualization gurus, and has been called everything from “Leonardo da Vinci of data” to the “Galileo of graphics.”  Tufte will be our guide as we think through what good visualizations say and how bad data displays can lie and distort or even undermine your intended argument.

It may well be the best statistical graphic ever drawn.

Static variants  (Do they add anything?)

Interactive variants (Does it help to be able to manipulate the map?)

Keeping it Honest: How Not to Lie with Pictures

This may well be the worst graphic ever to find its way into print. 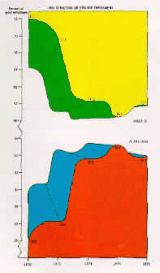 We’ve already discussed how not to lie with maps, but it’s easy to do with visualizations as well.  One of the biggest issues that Tufte stresses in his seminal work is how to stay honest with infographics.  One of the easiest errors to make, for instance, is to scale the radius of circles, or one axis of two dimensional shapes, which results in massively larger areas than your data actually warrants.

One of the most impressive data visualization breakthroughs of recent years was Hans Rosling’s invention of Gapminder: an application that really unleashed the “fourth dimension” of time and allowed data to be animated in an immediately understandable and powerful way.  His TED talk below illustrating global health data with the tool is legendary.

Google bought the technology and made it available for all to use as Motion Charts.

Choose one and check it out to see what people are creating.  Download or join a service and see if you can create something.