As I take this class I am presented with the question: Should students code? Oh for sure, they should. Code is a very powerful language. As society becomes more computerized and digitized, students should know what language is building the modern society they see around them. I would even argue that not only students should learn how to code, I think everyone should learn the basics of coding.

The reason why we learn other languages is because we want to communicate with other people more efficiently and maybe in the process even try and understand their culture, and if computers are becoming more and more important in our lives, I don’t see why we shouldn’t apply the same logic as before to this new computer language. As Kirschenbaum stated

‘Knowledge of a foreign language is desirable so that a scholar does not have to rely exclusively on existing translations and so that the accuracy of others’ translations can be scrutinized.’

However there are other views that state in the digital humanities, coding and the humanities are two separate entities. As Donahue stated in aligned agreement with what I proposed above.

“The very idea that they are, a priori, separate and distinct bodies of knowledge may be the king hobgoblin of any attempts to create something that professes to be a digital humanities situated somewhere between the two.”

Thus there are perspectives that believe that these two separate fields should be kept separate. 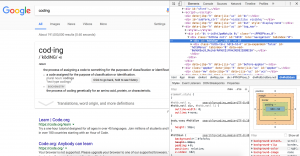 Coding is an art form in itself. I’ve had brief experiences with coding here and there, either in summer school or with self taught coding using Codecademy. I find that coding is just another language, except that this language is a lot easier to understand. Code as a language is great simply because it is as logical as it can possibly be. Anyone can code. Coding is just a conversation that you have with the computer about a job that you want it to complete. We always have conversations with each other about what we expect to be done, all code is, is a language that puts all the semantics into a more boiled down and dense concrete language. Coding is also a lot easier to learn than other languages. Personally if I compare my learning experience with code with a foreign language, I could confidently say that learning code is a lot easier than a foreign language. If our education system made coding a requirement just like how a secondary language is a requirement then more young adults would understand how to use this new powerful tool more effectively in their lines of work. There is no field in science or in general that does not require any coding at all. Computers have ushered in a new age of information, and digitization and with this new age, every field we know of will be touched by this new technology. 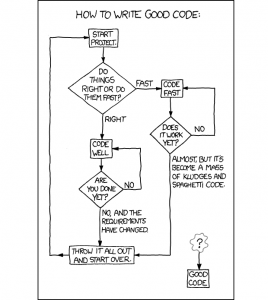 Code may seem like a daunting language to learn at first, with its unfamiliar language and its intimidating structure. But honestly it’s not that hard. Once you get the key commands down, coding will become second nature to you, similar to how once you understand the basic words of a language, learning that language will become easier and easier. And as with every skill, coding takes practice, practice, and practice.

Overall I am glad that this week we were introduced to code. I believe that to be successful in any field nowadays one needs to be knowledgeable in coding. I am excited as to what we will do with this code. I am even further excited by the prospect of building my own website from scratch.

You can see the progress I made in coding here!

3 Replies to “A Week Without Coding Makes One Weak”