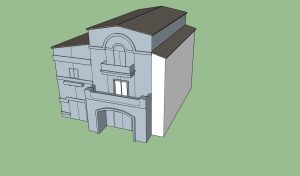 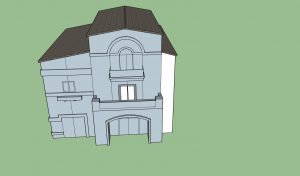 I would have to say that using sketchup has been a frustrating but fun experience. The program is often difficult to use with clunky controls (especially when drawing lines) though I did enjoy the challenge of figuring out ways to get about it. For example, Instead of drawing a rectangle that seemed roughly in the middle, I often drew two rectangles with a vertex at the midpoint with equal width and height in order to create a rectangle that is definitely centered. While making the house itself I found that adding small details such as protrusions go a long way to making the house look more realistic. I also found that adding paint to it made it look much uglier and therefore I refrained from doing so. I personally have no idea why the white part of the house is white but I decided to leave it be. Ultimately I think this entire experience has given me good insight into how 3D modelling works. It has also given me a much greater appreciation for architectures who have to meticulously think through all the small details of each house they design.