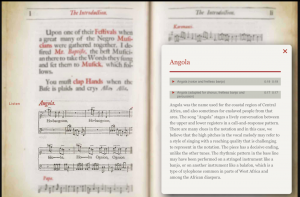 Musical Passage immediately caught my attention among all the listed DH projects. As a music enthusiast, I love to listen to music of all different kinds, and Musical Passage turned out to be even more fun to explore than I had expected.

This DH project is about the little known early African diasporic music. It contains recordings of several pieces of early African diasporic music, and a relatively short article explaining the background. Compared to the Enchanting Dessert project we’ve looked at in class, Musical Passage is of a much smaller scale, and I found it much easier to figure out a “correct” order to explore this project:

In terms of sources, this project primarily used Hans Sloane’s 1707 book Voyage to the Islands of Madera, Barbados, Nieves, S. Christophers and Jamaica. This book contains some very first transcriptions of African diasporic music in the European tradition, and the music pieces presented in Musical Passage is a subset of the book’s collection.

In terms of processes, the authors of Musical Passage took some music transcriptions in Hans Sloane’s book, and then reconstructed and recorded the music by themselves. In this step, they also resorted to music professionals for music interpretations using Sloane’s notes. They also wrote the background article that is another important component of their website.

When it comes to presentation, they created two separate sections on their website, EXPLORE and READ. The EXPLORE section contains a single page of music scores of the pieces they’ve selected. When a viewer clicks the scores of any piece, a small window will appear next to it, which gives the viewer two recordings of the piece that he/she could play, followed by text that introduces the piece and its background. The READ section contains the background article as well as some illustrations from Hans’ book.

Although Musical Passage is a small DH project, it is very well-designed. The creators’ attempt to include recordings of the music allow us to connect more easily to the music hundreds of years ago.