Even though it is not especially new software, 3D modeling has always felt somewhat futuristic to me. I’ve really enjoyed  working with SketchUp  and PhotoScan, I think in part because I feel like the work I’m doing is more impressive than it truly is. Regarding the research questions for which 3D modeling and simulation are appropriate, I think that the uses are many and varied.

As mentioned in previous classes, procedural modeling is good for projects of a larger scale, perhaps the modeling of a city. Giving the computer a set of rules or instructions and letting it create the city is certainly more efficient than building all the buildings separately.

Manual modeling has its uses, however. For extremely complicated shapes or buildings that must be done accurately, manual modeling gives the creator the greatest degree of control, a benefit mitigated by the tedious nature of this method.

Scanning can be useful for creating an accurate digital copy of physical objects that may not be easy to model manually. An example of this might be a knife or crown. Those digital copies might then be used by computers comparing thousands of 3D model entries to look for similarities between artifacts.

Photogrammetry (what we did in class the other day) is probably most useful when one is trying to make a photo-realistic 3D model of a person, place, or thing with complex textures. Because the photos are first stitched into a mesh that is then wrapped around the point cloud, an accurate 3D model of the subject is typically easy to obtain. This technique is best on a smaller scale, as many photos of small areas are required to create an accurate model, and doing anything larger than a building would take considerable time.

I chose to go more into depth on the 3D Visualization of the Upper Nodena Site, found here. This project aimed to reconstruct the Native American settlement that was on the Hampson family farm hundreds of years ago. It also catalogued all of the artifacts found on the land, creating 3D models of each of those and including them in a database found on the website. The interface is intuitive and very thoroughly themed…

For recording the artifacts, I believe the creators of this project used photogrammetry. The models are realistic and accurate, and I think photogrammetry was the appropriate tool for this task.

For creating the village, I believe manual modeling was used. There is not enough pattern to justify using procedural modeling, nor would there every be a reason to update this model in the future (as is one of the upsides of procedural modeling). The buildings are fairly simple, and could easily have been copied and pasted into their correct locations after creating only one or two prototypes.  You can see from the screenshot below that the buildings used int his model lack the variety that one would expect from buildings in the real world. 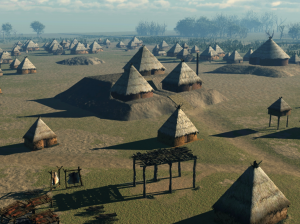 The only critique I have of this digital humanities project is the font choice. I mean, come on. Papyrus is not a serious font choice. Stop.